It was the longest, darkest night of the year. There was no moon. The stars seemed coldly bright against the deep blackness. From the heart of the forest, a slow spiral of smoke rose to the sky. The People gathered quietly around the warm remains of the bonfire that had burned all day.

The feasting and dancing over, they nestled together in their woolens and furs and waited expectantly for Grandfather to speak.

Sitting beneath a gnarled, ancient ash tree, the old man seemed to blend into the trunk. His weathered skin looked much like bark. Wisps of white hair surrounded a kindly, wrinkled face with eyes too old to see and a smile that revealed a few remaining teeth. Wrapped in a woolen cloak, his hands grasped a walking stick carved with markings that denoted his status as Grandfather of the People. Around his feet, children nudged and bumped each other in an attempt to get closer.

Grandfather slowly raised his hands towards the sky. All was still. In that moment, even the embers of the fire were silent. Into that silence, Grandfather spoke.

As it was, in time before time, watched by the stars and moon, Gaia, mother earth, gave birth to her four daughters. This labor was long but joyful. The final release was like a sigh. She held the babies in her lap and called out to the universe, asking angels to come.

The light of a million angels descended and encircled Gaia, holding her in a loving embrace. With delight, Gaia presented her daughters to the celestial gathering, naming each one in turn.

Gealach was her first born, named after the moon. The angels caressed this baby with the palest of lights, as if a moonbeam had come from above. She was given the blessings of new beginnings and renewed hope; a seed starting to germinate.

Grian was the second daughter, named for the sun. Her blessings were of expansion and growth; the seed breaking through the soil and reaching for the sunlight. This child was warmed in a light of vibrant green.

Cré was the third daughter, named for the earth. Surrounding her with a light of brilliant rose red, the angels blessed her with the attributes of completion, joy and peace; the bountiful harvest of crops.

Gaia named her fourth daughter Réalta for the stars that were shinning above. Réalta was blessed with silent contemplation and reflection; the dormant seed within the earth, seemingly inactive but very much alive. The light the angels surrounded her with was deepest indigo with cool starlight sparkling throughout.

When the naming was complete, the angelic host embraced the entire planet with a rainbow of color, the like of which has never been seen before or since. In their joy, they sang a note that echoed though the universe. In this angelic music, the daughters of Gaia learned to dance. Even though they were babies, they bent and swayed to the rhythm of that note. It was a truly amazing sight.

The dancing awakened the devic kingdom. Gnomes shifted in a very slow and methodical pattern deep within the earth. Undines spewed a torrent of dewdrops up towards heaven. Sparks illuminated the sky as Salamanders joined in. Sylphs blew a gentle stream of air in spiral patterns around the daughters of Gaia.

It was complete. And it was a new beginning.

The angels returned to their heavenly realm. The devic kingdom was restored to their ordinary patterns. Then the daughters of Gaia commenced dancing in earnest.

With each complete circle of their dance, the daughters grew and matured.

After she changed from baby to toddler, Gealach was the first to break away. Improvising her own steps of new beginnings, she danced a spiral around the earth. Everywhere she traveled she brought the joy of Spring.

Grian was the second to leave. Dancing herself to adolescence, she then followed Gealach’s path, swirling and bringing the warmth of Summer to us.

Cré matured to ripe womanhood before departing. Her dance was full and rich and delivered the bounty of Autumn to the People of the earth.

Réalta was the last to leave her mother. She stayed until she became a crone. Her languid dance of tranquility was the dance of Winter, our invitation to rest. Blessed be.

So it was that the daughters of Gaia, out of love, began their dance of the seasons. Though we cannot see their dance with our human eyes, we can see the effects in our lives. This is the dance that brought us life. This is the dance that brings us together tonight. We have had our harvest for the year. Cré has left us to continue her journey. Tonight is the night that Réalta arrives. We send our gratitude to Cré and our welcome to Réalta. May the dance of the daughters of Gaia continue from now until forever.”

Grandfather lowered his hands and sat in silence. The People snuggled deeper into their furs and woolens with a murmur of approval. With every change of season they gathered to hear this story. The repetition brought brought comfort. Life was good.

Suddenly there was a whirl of snowflakes that sparkled in the light of the dying bonfire. Looking closely into the center of the whirlwind, the People could see color and form. The colors were of a pale ice blue and deepest indigo. The form was that of an old woman moving in a slow, sweeping dance, a counterpoint to the whirl of snow. Then, just as suddenly, she was gone leaving frigid air and snowflakes in her wake.

The People looked at one another. Had they really seen her? Had she really been there?

Grandfather smiled a broad smile. Even his sightless eyes had seen her. “Rarely does a daughter of Gaia allow herself to be seen. My children, we are truly blessed this night.”

Silently the remaining snowflakes drifted to the earth. 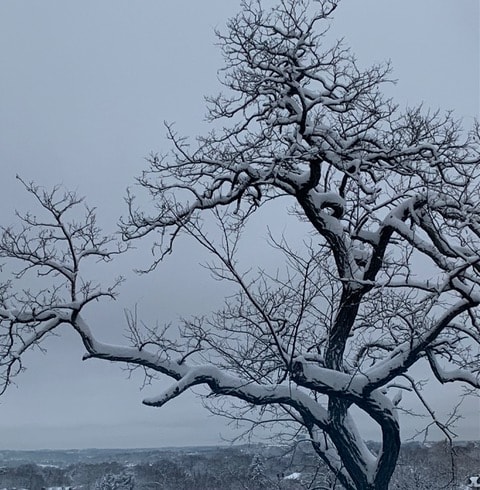